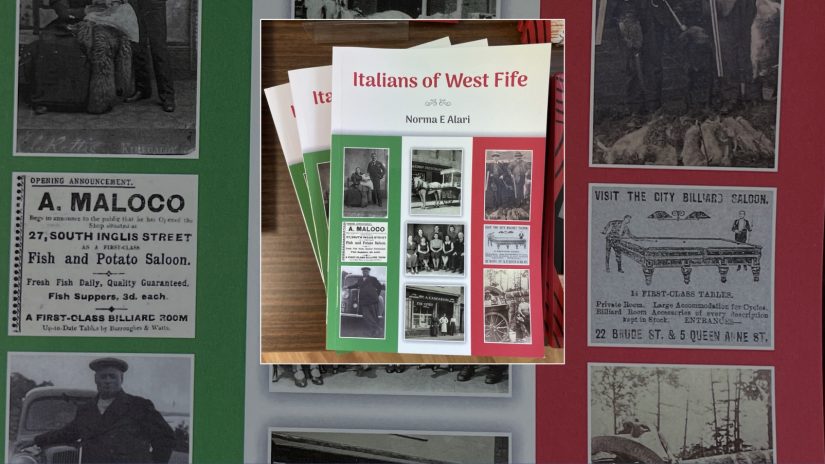 The Italians of West Fife

We love to feature the work of local authors. Most recently, we have shared a podcast on a book from Sandy Green and his history of Cupar Amateur Musical Society as well as a feature on Gary Smith and his latest book, A Time for Heroes. On a recent visit to Courtyard Books on Ladywynd, we discovered a new book written by another local author, Norma Alari. Norma’s book – Italians of West Fife – is on the history of so many Italians who have lived and worked in Fife …

Norma was born and grew up in Dunfermline. She explains: “That was in the 1950s and my parents had a fish and chip shop in Chalmers Street.” Her grandparents – all born in Tuscany – had arrived in Scotland soon after the turn of the 20th century.

When Norma left St Columba’s RC High School in Dunfermline in 1970, she went into nursing. “My psychiatric nurse training was based at Stratheden Hospital, so I got to know Cupar and the surrounding area really well.” It wasn’t until more than 30 years later – after Norma had retired – that she started doing some investigative work into her family’s history.

“I began to be interested in tracing my Italian roots.” She collected all manner of information from the Census, library records, word of mouth and all kinds of written archives covering academic papers. Norma soon realised that the amount she had collated at her home in Cupar was far more than would be of just for her benefit. She says: “I wanted to acknowledge the many Italians who have lived and worked in Fife so decided to write a book about them.”

Some of her records show Italian influences dating all the way back to Roman times – and how through the centuries artists and craftsmen traveled from Italy to work in towns and cities far from their homeland. As is so often the case, the migration of the 19th century was sparked by poverty and famine. Both struck Italy and, as a result, Italians started to travel as economic migrants to find a better life.

Norma has no prior writing experience – it has simply been a passion. But as anyone knows, it takes time to write. At the beginning of 2020, the lockdown gave Norma all the time she needed. She started writing – and didn’t look back. Earlier this year, her book was completed.

It is 130 pages packed full of facts, figures and stories. She adds: “I’ve written about individuals who have lived and worked in Fife – as well as other areas of Scotland – between 1800 and the 1930s.” She hopes it will appeal not only to those who can trace their Italian ancestry but also anyone who has memories and stories of their favourite Italian-owned chip shops and cafés.

Her book is now available at Courtyard Books. Norma has expressed her sincere gratitude to all who have helped in her research – from librarians and archivists, past and present. “This is as much their book as it is mine. I have loved researching so many families and am really happy to have been able to bring their stories to life.”