The year is 1658. It is a full 101 years before the birth of Robbie Burns. A group of men in Cupar has gathered. Like-minded, they’re keen to help their townsfolk – to support Cupar through charitable works. Roll the clock forward, Burns himself would join this band o’ brothers – united in a belief of helping others. The organisation? The Freemasons – and Cupar has one of Scotland’s oldest lodges.

They’ve been around for more than 360 years in the town and have been in their current building since 1811! We caught up with ‘Number 19’ to discover more …

There can’t be many organisations that can trace their history back more than three centuries. Lodge 19 Coupar O’ Fife is Cupar’s Freemasons’ Lodge – ‘number 19’ on the roll of the Grand Lodge of Scotland‘ acting under a charter from them. The ancient society has been represented in the town since the mid 17th century. Much of the early history is lost in the mists of time. Before their current premises, they held gatherings in the Ladywynd. In 1811, the current Lodge building was erected and today it is listed – Category A for its architectural importance.

Alan Blackie of the Lodge explains: “We are one of the oldest Lodges in Scotland and one of the longest established organisations in Cupar. The hall itself is worth seeing as it has just been refurbished, re-roofed and has a wonderful full size mural on the East Wall. We have a wonderful, friendly, diverse, group of members who are very welcoming.”

There’s no denying that Freemasonry is steeped in history and many a myth – but Cupar’s lodge is keen to break down barriers, engage with the community and demonstrate the good works they deliver in support of many local projects. They “welcome any man of good standing over the age of 21 as long as he has a belief in a Supreme Being of some description“. 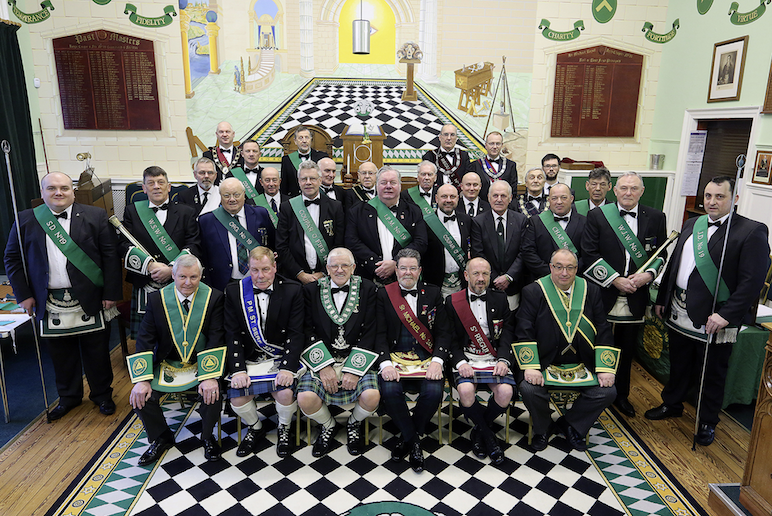 How did the Lodge come into being – and how do people get involved? “Each man’s journey into The Craft is his own. People join for many different reasons, often because of family ties but not always. Freemasonary is a worldwide organization and once you become a member you have friends and places to visit all over the world.’?Almost every town of size has a Lodge and they will always welcome a brother into their midst.” The Cupar Lodge is one of 49 in Fife – and one of 600 across Scotland – every lodge supporting each other and reciprocal visiting is encouraged.

When it comes to members, there are more than 4 million worldwide – and many famous folk have been members through the years. Robert Burns and Sir Walter Scott were both Freemasons – as well as Fife’s legend, Sir ‘Jimmy’ Shand MBE.

The Lodge is intrinsically linked with service to the town, Kingdom and country. During WW1, they billeted soldiers from the Ayrshire Yeomanry. In WW2 – the premises requisitioned by the War Office – the hall was base for some 20 Polish soldiers. A plaque marks the event. Cupar’s Cenotaph bears the names of 5 out of 6 of the Lodge’s members who gave the ultimate sacrifice: Beatrice Campbell, the daughter of one of the Lodge’s past Masters – John J. Campbell, the Bonnygate Fishmonger – is the only woman so honoured.

Lodge 19 Coupar O’ Fife is a charity organisation: they have many members on the books – around 15-20 are regular attendees – and their meetings usually welcome visitors from other lodges – sometimes from overseas. Alan adds: “We have been part of Cupar life for centuries. We laid the corner stone for the Corn Exchange, we have taken part in parades and Town events for hundreds of years. More recently we’ve represented the town in far flung places such as Reykjavik, Dublin, Newry, and Minneapolis – as well as nearer to home.’?We hosted over 100 men and their wives from Iceland last year in a wonderful few days of brotherly love and harmony.”

Every year the Lodge donates significant sums to support local and national charities – including Kilmaron School, one of their favourite benefactors and also provide Christmas presents for ‘friendless patients’ at Stratheden Hospital.

Touching on the Lodge’s historical links, we asked Alan what he’d recommend for any visitor to the town. Alan says: “Cupar is very historical. Visit the library and Heritage Centre. There’s also information in the Cupar Corn Exchange – and a very knowledgeable local historian called Mr. Stephen Penrice.”

Discover more on Lodge 19 via their Website – where there’s much more information on the Lodge’s history – as well as their Facebook page.

You can visit them at the Masonic Hall, 72 Bonnygate, Cupar, Fife.

The lodge meets every 1st and 3rd Wednesday of the month (September to April) at 7:30.