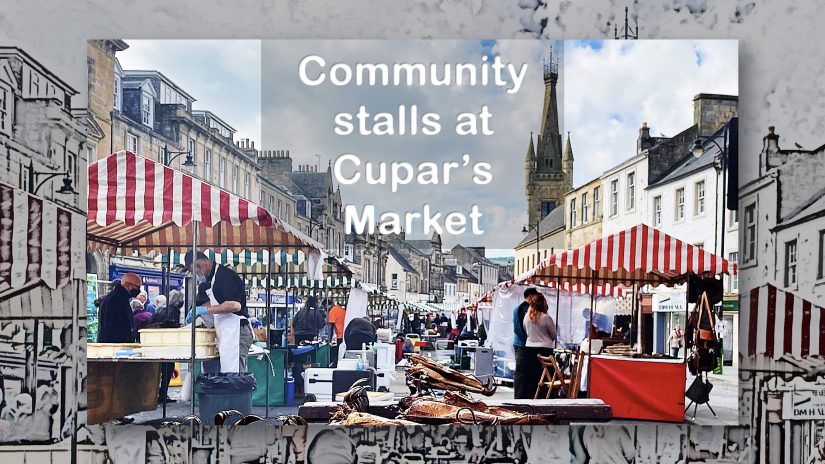 Plans are shaping up for the return of Cupar’s Celebration Weekend this coming September – and we’ll share more soon. Last year, the event coincided with the Fife Farmers’ Market and several community groups took stalls. To maintain that community momentum, we’re sponsoring a community stall at each of this year’s markets. Launched earlier this year, the uptake was fantastic! The following will be updated to show the upcoming stall at the top and the rest in chronological order. When each completes, we will add to the base so all can see what has been delivered …

As we count down to each weekend, we will share more via this Blog as well as on our social media channels to support all those taking part.

The year’s stalls in review …

Two groups took to the sponsored stall at the August market – Sustainable Cupar (showcasing their year’s work in planting tree, work on the River Eden, active travel and energy issues) together with Over Rankeilour Walled Garden. The Garden project – just outside Cupar – is planned for use for therapeutic / community benefit and they made use of the stall to help raiuse funds and awareness for their work. 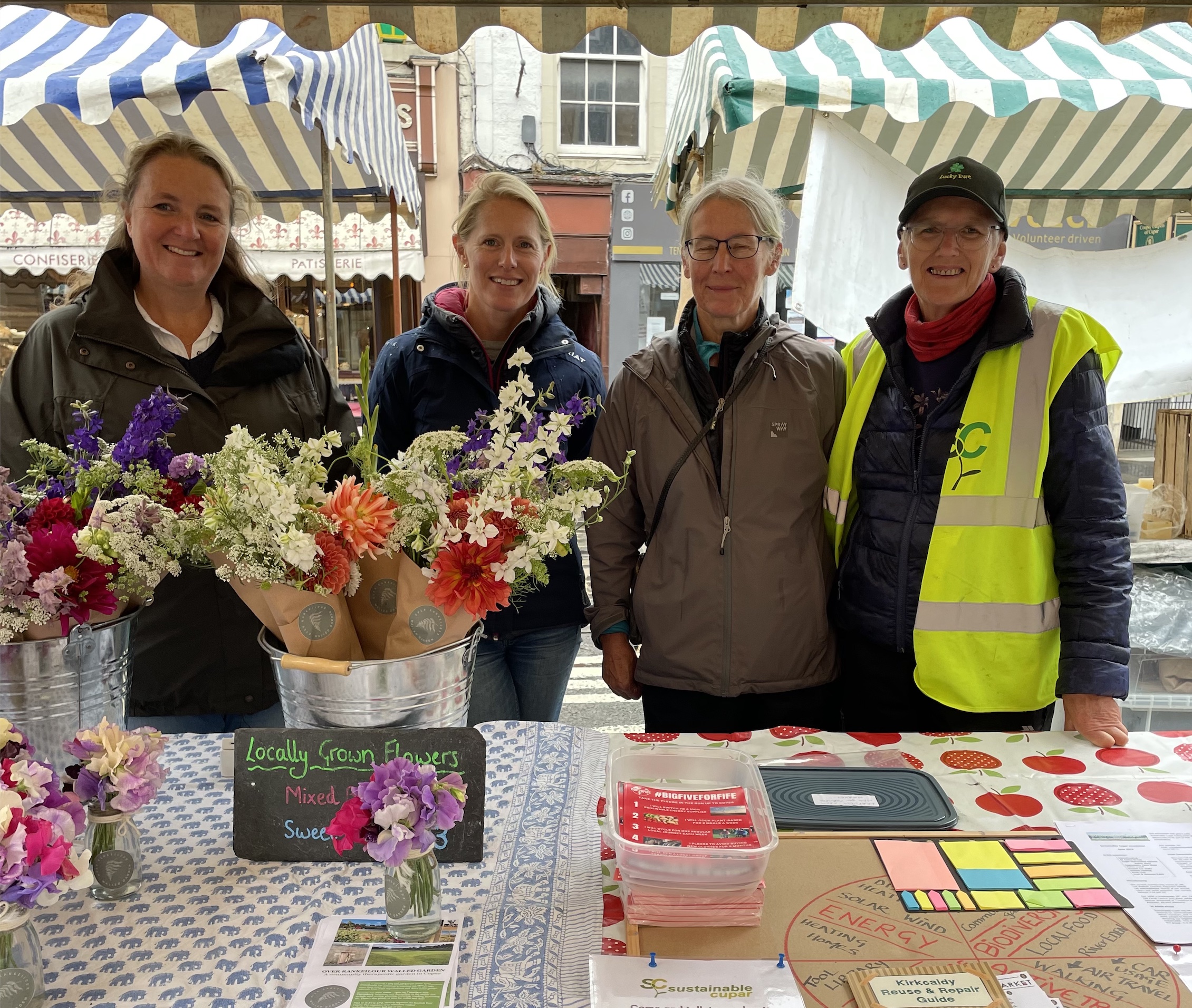 Sustainable Cupar dropped a note after the event to say: “Having the stall has enabled us to directly connect with people and explain to interested folk what we are about. We have recruited new members, re-connected with old ones, and have been able to take to opportunity to network with those around us, including some of the other stall holders. It has been a very worthwhile experience, and one that we greatly value in these post-covid days when we are all re-establishing face to face connections, and recognising the value of community. Thank you CuparNow!”

The Bloom team were “very excited to get this opportunity to be part of the Market day.” They told us: “It will put us in the spotlight, let people in town see who we are, let them know what we do and hopefully may encourage new members to join us, help with our fundraising and to show that we play an important part in the community.” 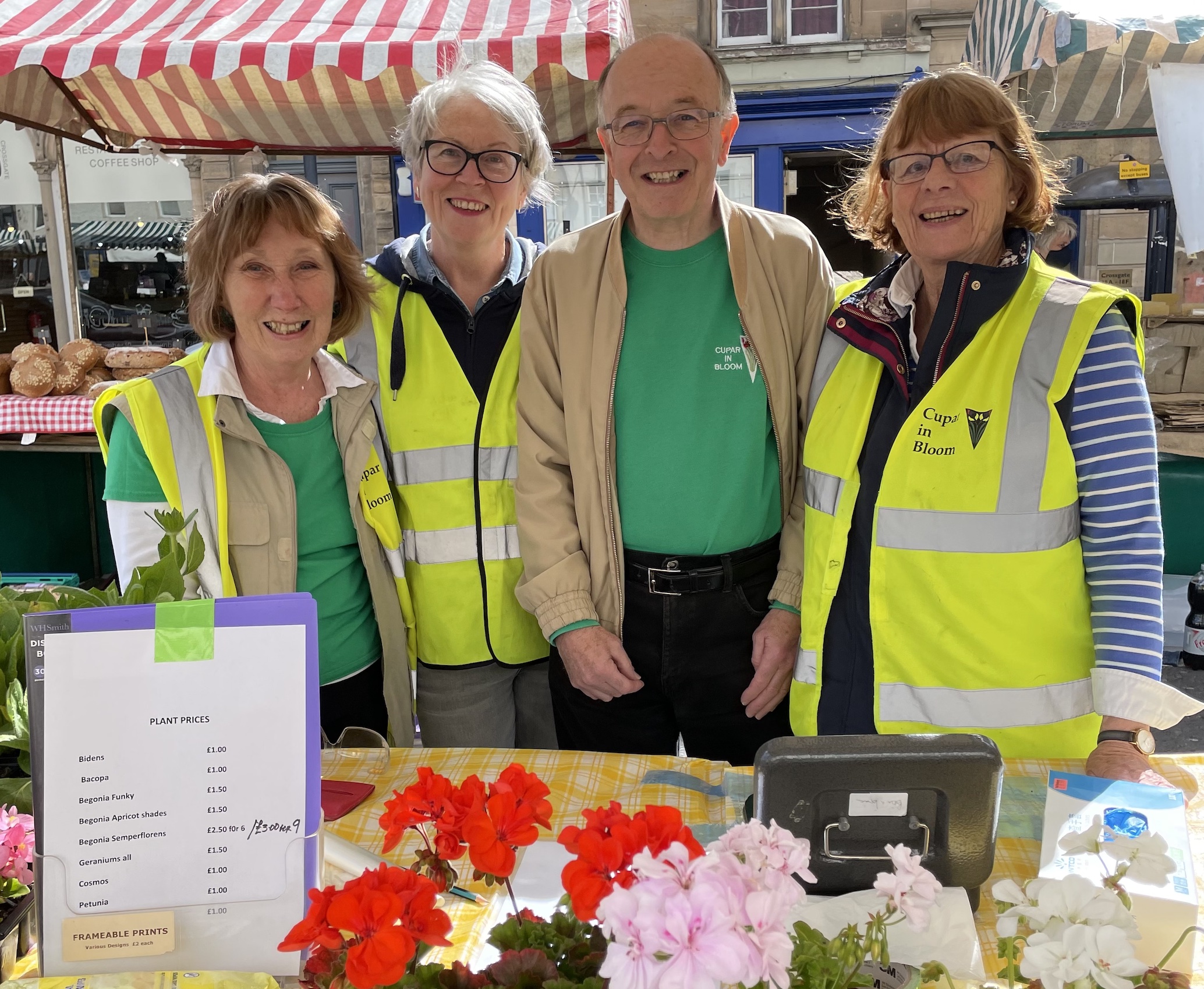 And after the event …

“We had a great morning at the June Farmers Market in Cupar!  The sun was shining and we were happy to be there in a prime spot opposite Fisher & Donaldson’s. There was a lot of interest with folks stopping for chats and asking us about the plants we were selling and what we got up to. We sold nearly all the plants and were very pleased with the money raised plus donations which made a total of £124. We had the added bonus of another volunteer wanting to join our happy team. So, altogether a very successful & enjoyable venture for us and many thanks to CuparNow for giving us the opportunity!” Our pleasure!

Saturday 21st May – we hosted two community groups at the May markjet – Cupar’s Skoot Aboot Group and those organising Cupar’s Platinum Jubilee Celebrations with the Picnic in The Park. Both took stalls to help raise awaress and funds. 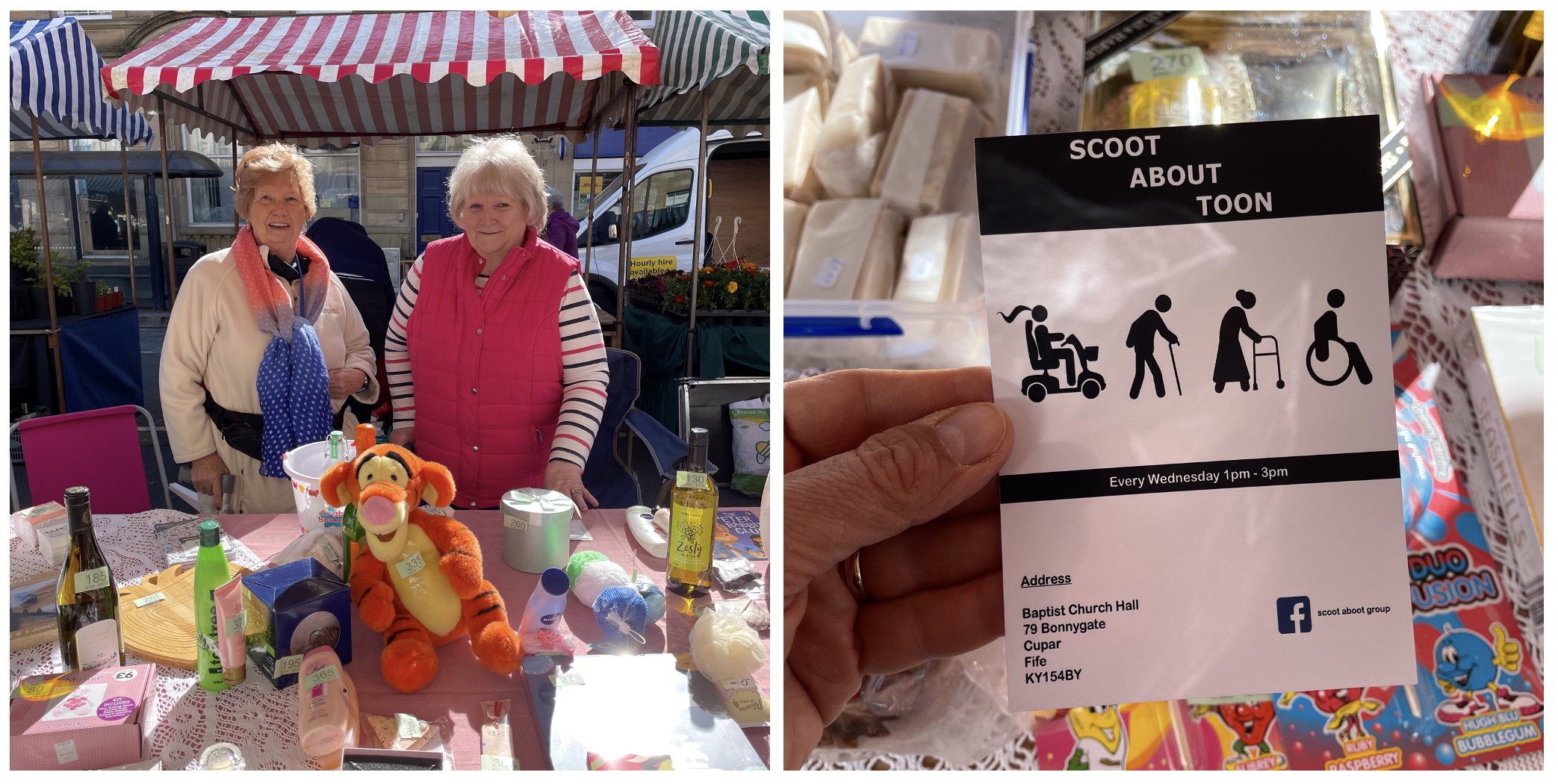 The Leuchars Military Wives’ Choir is one of 72 Military Wives Choirs in the UK and worldwide. The first choir started 10 years ago in 2012 to help wives and partners with support while their husbands were away on detachments, so the choir’s ethos is “Sing, Share & Support”.

Jacqui Crowe of the choir says: “This year marks the Foundation’s 10th birthday and later this year, we will have a 10th birthday concert in Grey Friars Kirk in Edinburgh.” She adds: “Leuchars itself was formed in 2013 and we will celebrate 10 years next year in 2023. The Military Wives Choir Foundation is a registered charity and we do performances and fundraising events to raise money to support our choir.” 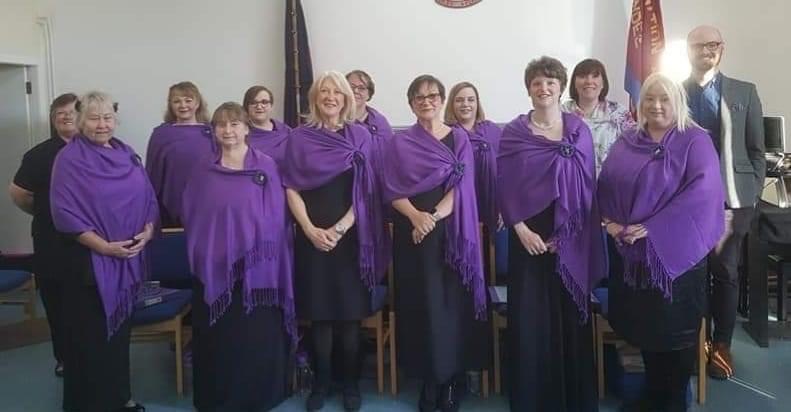 Update from the Choir …

After the Choir’s attendance, Jacqui shared: “Everything was very well organised. The other stall holders were welcoming to myself and my daughter. The event was good for raising awareness about the choir. Thank you again for inviting us to take part.” 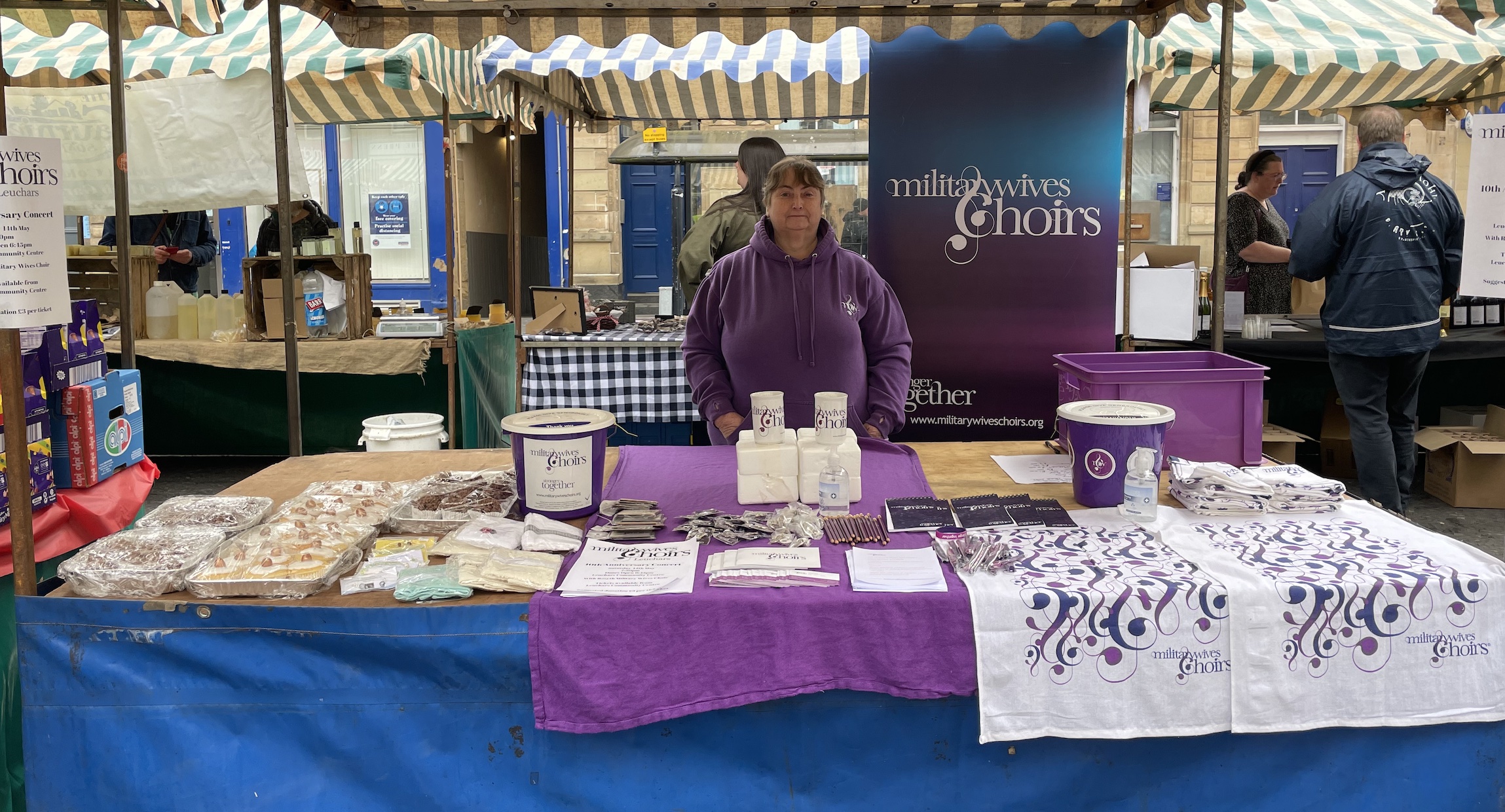 Coach, Kevin Bruhn, is looking forward to this Saturday at the Market, saying: “For the Community Stall this Saturday (19th March), we have a few things happening. We have organised a Tombola. Prizes we have on offer to win are rounds of golf at Cupar Golf Club and Elmwood Golf Course, restaurant vouchers for Mystic Dragon and Don Michele in Dundee, plus many more. We will also have a lollipop game for the kids and a competition we are running within the team. We have asked the players to design a special flag for taking to the tournament. The best 3 will be selected by the coaches and they will go to a public vote at the stall on Saturday. The winning flag design will be made into a big flag which we will fly in support of the team during the tournament.”

Cupar Colts 2010’s are participating in The UK international Cup – one of the most prestigious tournaments in the country. The Club has been lucky enough to be able to register two teams to compete in the tournament at Under 12’s level. They will be taking 20 players, 4 coaches and 15 parents to the tournament over the weekend of Friday 30th April – Sunday 2nd May. Coach, Kevin Bruhn, says: “We will be staying in a 4 star hotel in Derby called the PentaHotel which is situated right across from Pride Park, the home of Derby County. We have organised to have our own bus for use over the entire weekend and hope to make it an amazing experience for the players. The tournament itself is being held at St George’s Park, home of the England National Football teams and is a world class facility.”

They have started fundraising for the trip, to be able to fund the players and the bus. Kevin adds: “We have many things going on at the moment, with Football cards and raffles. We have organised a Physic night on the 17th March and also a sponsored walk from Crail to Kingsbarns beach, where the players are required to dribble and pass a football all the way!”

Kevin concludes: “This is an exciting opportunity for our players to be able to compete against teams from different countries as well as teams from around the UK. It will be an amazing experience for everyone and we hope the players, parents and coaches will talk about it for a long time to come.” Their target is to raise £4000 and they look forward to being at the Farmer’s Market in March where their fund raising continues.

Update from the Colts …

“We were contacted by Pat Gilmartin from Gilmartin Construction, who saw our blog. Mrs Gilmartin gave the team a substantial donation to the club. Pat’s donation has allowed us to pay for the bus for the weekend while we are away. It was an amazing surprise and something we all very very grateful for. We have also sold out our Physic Night on Thursday 17th March, with 80 people attending the night. We will also be holding a raffle on the night with many prizes donated to us from local businesses around Cupar. We have had support from The Wee Kingdom, The Press Cafe & Bistro, The Boudingait, Maisie & Mac, Cupar Tea Room, Yaspers, Lachlan’s Fresh Fish and Contemporary Salon all providing vouchers for prizes. Again, we are extremely grateful for the support we are receiving from the local community.

We completed our sponsor walk from Crail to Kingsbarns, which had few surprises in store! The plan was to walk mainly along the coast, on the beach as much as possible, however due to the timing of the day and some of the group lagging behind, the tide had come in and part of the route was blocked! We had to find an alternative route up over the hill and through some fields which made the day more of an adventure.

Our fundraising has be nothing short of outstanding!! We will be able to pay for all the players, parents and coaches to attend and also cover the cost of the bus for the weekend. I would like to take this opportunity to not only thank all the parents of the team, along with their friends and family who have kindly sponsored the players, took part in the Physic Night, helping out at the stall and the many, many donations they have contributed to, but also thank you and your team for helping us with the blog on CuparNow, without this exposure we would not have had the large donation from Pat Gilmartin. Thank you again. I can’t explain how much everyone connected with Cupar Colts appreciates all the help and support we have received.”

Trustee and Director, Alison Etheridge, says: “We are a children’s cancer charity who support children and their families on their cancer journey. Its so important for us to raise funds and especially as it’s been hard through COVID. We support local children and raising funds on the community stall would support a newly diagnosed child in Cupar.” You can read more about them via the Blog we featured last year. Just click on the image below.

We are inviting community groups from in and around Cupar to apply for the remaining slots. You can find more including details on how to apply for the sponsored stalls on our Blog via the link below. 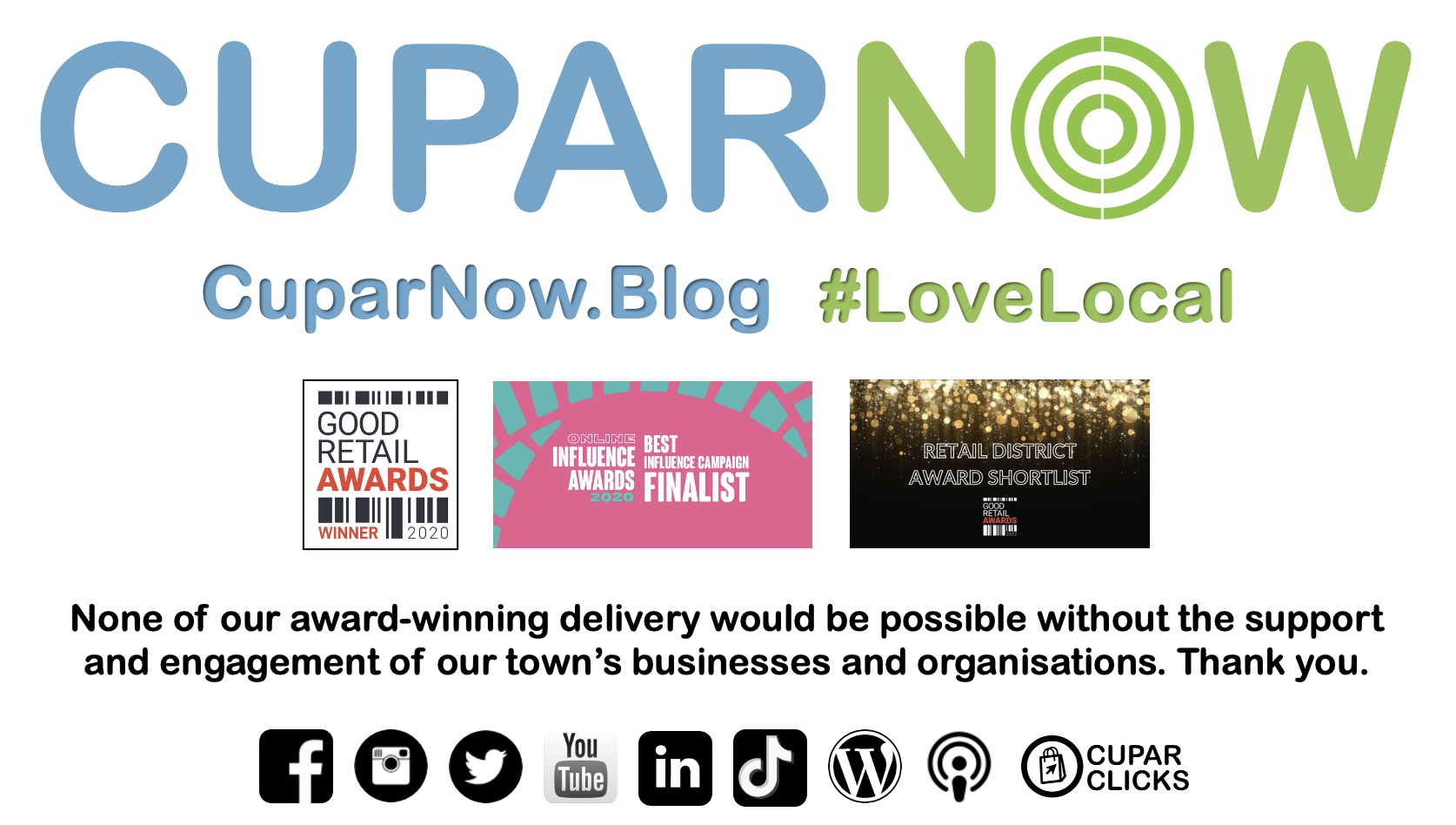