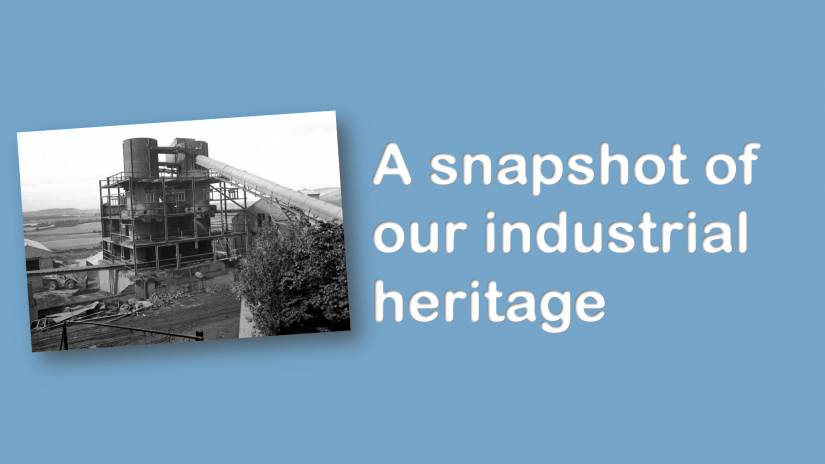 Volunteers associated at Cupar Museum and Heritage Centre continue to remain active despite the ongoing constraints caused by lockdown restrictions. Trustee, Ian Copland, has updated us on a recent Zoom presentation: “Our programme featured a talk by Brian Murray about Cults Lime and Brickworks, a substantial local enterprise that provided employment in the local area during its heyday.” We’re delighted to share a summary of Brian’s talk …

“Cults Lime was a large mining operation along the top of Cults Hill, south of Cupar.

Lime production stretches back to medieval times, with lime being used for agricultural and building purposes. It was also had an important role in suppressing methane explosions in underground coal mines and in removing impurities in the manufacture of steel. New lime kilns led to rapid expansion in Victorian times and in 1876 a branch railway was built to serve the works, connecting to the main line near Springfield Station.

In 1960, the Cochrane Family set up Cults Brick Ltd on the site, producing millions of bricks for the Scottish market. At its peak, the company employed 90 people, making it a significant employer in the Cupar area. However, major changes in the economy reduced the demand for bricks and the operation closed in 2004.

There are still many traces that can be distinguished in the area but it is overgrown and old mines make it dangerous to explore.

A map of the area (below) illustrated the location of the limestone works along the flank of the Cults Hill, extending some 2.5 kilometres following a limestone outcrop.

The original Cults Lime Works occupied the eastern end of Cults Hill, extending from Bunzion Works. Transport to and from the early Seventeenth Century workings were by horse and cart, but in 1876 a light railway line was introduced to facilitate the movement of the products. This was serving a major manufacturing concern, employing 20 men on the surface and 70 underground. The industry was dangerous, with frequent fatal and injurious accidents being reported in the local press. In 1932, a serious railway accident involving a runaway locomotive and ten loaded wagons on the steep gradient occurred, with the driver and his mate escaping by jumping clear as the train hit the pillars of a bridge.

The industry attempted to keep up with the times through innovative moves such as the introduction of a gas fired kiln in 1929, opened by Lady Cochrane.

After the Second World war, the rail line was discontinued and replaced with ex-defence forces vehicles. The loss of major customers in the heavy industries that used Cults lime required the company to change its focus to the brick-making industry. The brickworks comprised two brick presses, utilising former aircraft hangers that had been modified and re-erected on site.

Having explored the area on foot, Brian made the point that great care was essential where the ground is uneven and old workings are full of hazards. He mentioned that there had been at least one occasion when some youngsters had been exploring in the old mines when they became disorientated and needed to be rescued. There is plenty of material on YouTube and Facebook to satisfy the curiosity of those interested.”