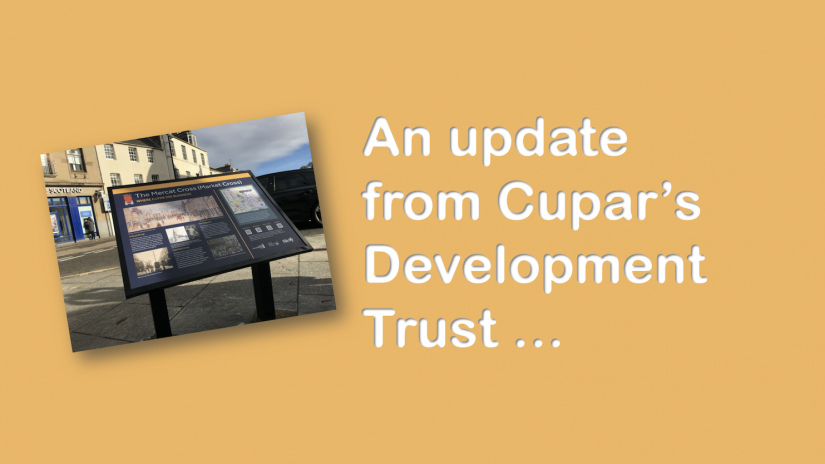 An update from CDT

Through the summer of 2020, the Board Members of CDT (Cupar Development Trust) continued to be engaged in various projects and contacts. The following is a newsletter update from the Trust …

WEBSITE: CDT?s new Website, re-built by Board Member Maurice Shepherd, went live in September and is well worth visiting.? It summarises past and present activities and events and contains links to some of CDT?s many partner organisations.? At the Zoom Board meeting in June, Board Members? continued to? discuss delivering the findings of the 2016 Planning Consultations in the town ? the Charrette ? and the recommendations of the 2017 Cupar Interpretive Plan, both of which can be found under the Reports tab in the new CDT Website.

INNER COURT: Des Montgomery continues to represent CDT in the discussions with Fife Council and Kingdom homes over this housing project. Conservation Area Consent has been granted, allowing the demolition of derelict buildings to take place subject to a condition that where possible stone from demolition will be employed in the new buildings. Demolition cannot start until a building warrant has been granted. An application has been lodged for a mix of 15 houses and 9 flats. CDT having initiated the Inner Court project in 2015, we look forward to development starting, bringing new life to the area of dereliction to the rear of the Crossgate and filling the gap site in Bonnygate. The development will open up former pends which have become disused and will create a new pedestrian route through the site between Bonnygate and Kirk Wynd.

SIGNAGE PROJECT: A major project, founded on both the Charrette and the Interpretive Plan, is the Cupar Town Centre Signage project.? This task is almost complete, with the new signage to be installed starting this month.? There will be three ?Arrival? panels, in the car parks at the Fluthers, the Railway Station, and Bonnygate.? These are designed to advise visitors how to find their way around the town.? There will be three ?Interpretive? panels, at the Mercat Cross, the Parish Church, and Burnside.? These are designed to explain ? to residents and visitors alike – Cupar?s history and heritage around those three parts of town.? There will also be a replacement panel at the entrance to the Railway Station car park, with a welcome to the Cupar Museum. The Signage project was a partnership among Cupar Development Trust (CDT), Cupar Heritage, and consultants CMC Associates, who prepared the town?s Interpretive Plan in 2017. Much of the information on the panels is the result of hard labour by the Trustees and Volunteers of Cupar Heritage, while the project has been driven forward by David Kirk, who continued to chair the Interpretive Plan Working Group after retiring from the Board of CDT last December. A Zoom presentation was held on 30 September, welcomed by CDT Chair, Bill Pagan.? Dr Mike Spearman of CMC Associates then exhibited the signage and explained the background to the project. Among the guests was the Lord Lyon King of Arms, who commended Cupar as a lively town and congratulated all involved in the Signage project.? The Lord Lyon has accepted CDT?s invitation to unveil the Signage, along with other items being celebrated, in June 2021, always subject to the Covid position at the time. If you would like to catch up with the Signage project you can view the Zoom event on YouTube? by clicking on the link below:

The Cupar Signage project has been very timely.? It progressed during lockdown, making Cupar ready to show off its retail and service town centre, as well as its history and heritage – both to Fifers and to visitors from further afield – after Covid.? The arrival of our Digital Improvement District ? CuparNow – is hugely valuable and timely, not least as the new Signage is digitally based, with QR Codes containing links to organisations and activities in the town.? CuparNow?s free town centre WiFi will be a valuable resource, making it easy to follow those links. An example of one of the panels, complete with its four QR Codes, is below.? Each of the Codes, which you can access via your smart phone app from your screen, will lead viewers to a different aspect of Cupar, including Walking Trails, Retail information, Events, CuparNow?s Blog, and a link to the Cupar Museum.

Below is a video created and published by CuparNow in October 2020, showing the completed signage ‘in place’ on a 1.5 mile walk around the town:

COLLABORATION WITH OTHER LOCAL ORGANISATIONS: In recent months, CDT has led two collaborative applications for funding, both for the benefit of both Cupar town and the entire catchment area of Bell Baxter High School.? The outcome of one of these is due this month, when Cupar will hear what ? if any ? funding has been awarded for a series of 10 activities and events in the spring and summer of 2021.? The other is a bid for funding of training for the trustees, committees? and volunteers of several of the area?s heritage organisations, and the decision on that will not be known until January 2021. The CDT Board will meet later this month, by which time the outcome of the first bid mentioned should be known.

PLANNING ISSUES: The CDT Board continues to monitor Planning issues in the area, including in recent months the Gilliesfaulds housing and the shopping centre in the former Reekie site.

CONCLUSION: The Board of CDT thanks all its Members and Supporters for the encouragement they have given during the difficult months of the Covid challenges.? They hope all readers will stay safe, as the virus continues to threaten us all.